For many visitors, once visited Santiago there is more and more a strong interest towards the galician Costa da Morte. Not the classic one though where we go sunbathing and swimming. Galicia offers the chance of extraordinary spots in what just from early XX century was described as the Coast of Death, where Joy, Myth and drama have been meeting for centuries.

Throughout the years I went in many occasions to the in spanish described as Costa da Morte and in this time I had the chance to realize the different aspects of such a tough, dreamy and almost mythical area. A person that goes to Finisterre, by the lighthouse feels the end of a very special journey, the mixed sensations that may even lead to a new beginning. The sun dies in the apparently calm waters of the atlantic ocean but a new day will come..We pray there, we meditate, others are happy by letting friends know by social networks that they are here.. #finisterre .

I am always impressed by the greatness of the ocean..I breath deep and relax by sitting over a rock. Quite close to happiness.

It’s no surprise that we sometimes feel the need of even more spirituality and we head to a mythical place strongly associated first to the pagans established here from the V century B.C. and then to Christianism; The Muxia sanctuary – maybe a name derived from land of Monks –  stands in front of the ocean..like a SHIP: are we embarking to the Avalon? Maybe..7000 years ago, the locals thought so..

Not now, when Muxia is fundamentally described as the holy place where Holy Mary appeared to Saint James, arriving on a boat made of stone. Joy was and is here. Stones and Galicia..They deserve an independent article.Muxia gives us a taste, it shows us in the distance what is behind what I consider the natural jewel of the area. No religion, no myth. Just wild wind, rough hills, rocks; white ocean foam mixed with the green and the blue of the sea, hitting sometimes the sand or others simply caressing it.

For centuries men suffered its wildness therefore the number of shipwrecks. Maybe the most tragic story is the one that happened here on November 10, 1890. A British Royal Navy torpedo cruiser, the HMS Serpent, which had been launched just three years before shipwrecked, killing more than 172 members of the crew. Only three people survived. Close to Cape Vilán Lighthouse – an area in which just few days ago they had 12 meters high waves – there is the English Cemetery consecrated on November 23 1890. Rafael Lema Mouzo is a great specialist of the area on these issues

The New York Times described the episode on November 15 1890 like this:

Definitely our Land’s End spots are moving places for different reasons but in each the human beings have been part of them in their deepest concerns; the wider spiritual side, religion with its traditions and the never ending battle against natural phenomena.

To live the experience of the Costa Da Morte do contact me to italo@italopendola.com

Italo Pendola
Hola! My name is Italo and I live and work in Santiago de Compostela, Galicia, as Professional Tour Guide in this fascinating region in the North West of Spain. With my wife Angeles Rodriguez we made a team to share with you an unique experience.
Previous postGalicia: exploring the crossroads of Spanish and Celtic culture
Next postWhich is my Camino de Santiago? 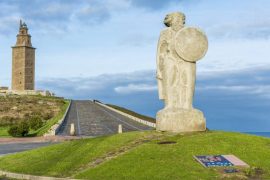 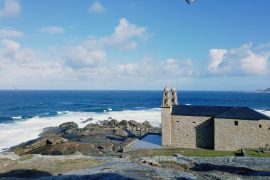 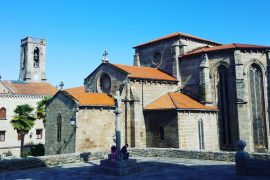 Betanzos Of The Knights Art Tour